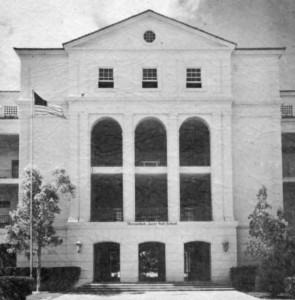 Shenandoah Middle School Museums Magnet has a great history and great traditions. Our school first opened its doors in 1926, but it was not located where it is today. Our school began as a three-story building built to house 700 students in the ever-growing Southwest Miami area.

As time progressed and the city grew, Shenandoah’s population increased creating a need for a new, state of the art building. By 1940, land was purchased on 19th Street and 19th Avenue, construction workers were hired with the help of the Works Progress Administration (WPA), and the construction began. Students were then moved in as soon as it was completed. Shenandoah became of the most modern and well-equipped schools in the South. Meanwhile, the “old” building became Shenandoah Elementary.

On December 11, 1942, the beautiful new building was formally dedicated with great fanfare. Since then, the school has been slightly modified with the addition of an auditorium, locker rooms for physical education, and air conditioning. An original walkway is no longer in existence since the library was expanded, as was the main office. A pond (with fish and everything!) which was in the original patio, was covered up in the 1970s.

In 2001, a new building (with modern science labs, art and dance studio, and a computer lab) was dedicated. Our patio was also converted into a courtyard for all to enjoy. In 2002, students, faculty, and community members further beautified our school by donating plants for a new landscape and adding a fountain that sits between both buildings. We also currently house Coral Way’s Pre-K and Kindergarten in our backyard.

In 2005, our school was awarded a Magnet Schools of America grant to start the only middle school museums magnet program in the State of Florida. The Museums Magnet program combines the resources and collections of local museums and cultural institutions to create innovative, multidisciplinary educational experiences for students, parents and teachers. The program strives to use instructional strategies, founded in the humanities, which allow students to develop critical and rigorous thinking skills based on individual experiences and interactions with object-based learning resources.

Today, with almost 1200 students, Shenandoah Middle continues to possess a pedigree and backstory dedicated to helping people and preparing children to be productive and effective members of society. As this school continues to develop and mature, our long pageantry of student excellence, teacher dedication and community involvement will progress, ensuring that the basic objectives and principles upon which this institution was founded upon are preserved.