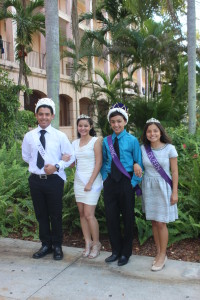 “What team are you on?” If there is one thing that students at Shenandoah look forward to the most is the Purple and White game. Started in the 1940s as the Shenandoah Bowl, this memorable tradition became a huge event – one that everyone would reminisce about for years to come. Originally, the entire school was divided into Purple & White – according to your homeroom class. Each team elected a queen who represented the team on game day. Each team also had their own cheerleaders! Held during the Thanksgiving weekend, the excitement and pre-game festivities were something everyone looked forward to as a student at Shenandoah. By the 1970s and 1980s, the teams were serious business! They had Spirit Week and pep rallies to announce each team’s royalty and to introduce the players.

Sadly, the games ended in 1989 due to the conversion of the school from junior high to a middle school. It was devastating to many who had attended our school and had looked forward to being a part of the tradition.  But, due to popular demand and with the encouragement of our school alumni, came happy news.  In 2006, the school had decided to bring back the famous game that everyone missed – but as an eighth grade event.  Years later, it was changed to the original format of including the entire school as part of the festivities.

Thankfully, the tradition continues today.  This year’s game was a huge success with a big win for the White team.  And so the tradition of the Purple & White game continues for the next generation of Shenandoah students.